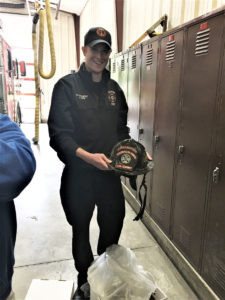 Adam Cain with the helmet he was wearing in the explosion.

Clinton firefighter Adam Cain returned to “light duty” Wednesday and continues his recovery after being seriously injured in January explosion while fighting a fire at the ADM plant.

Firefighter Eric Hosette was killed in the explosion. Cain spent nearly three weeks at the University of Iowa Hospital being treated for injuries that includedseveral broken bones and a collapsed lung in a fall of 88 feet at the fire. He says it feels good to be back.  “For the most part light duty just entails paperwork and stuff around the station. It’s still doing physical therapy, getting me stronger to hopefully return back to full duty soon,” Cain says.

Cain called it a journey to get back “From laying in the hospital bed all the way until now — it’s been a lot of work. Go out all the time and being recognized by people, and the thoughts and prayers, it feels good,” according to Cain. He says he wants to get back to full service sooner rather than later. During his recovery, Cain says he’s stopped at the station when he can and believes it has been therapeutic for everyone.
“It helps, just hanging around the guys talking — it doesn’t even have to be about the incident — just talking in general helps everything,” he says.

Cain showed off his helmet Wednesday that was torn off in the explosion and later found in the ADM plant.

Clinton Fire Chief Mike Brown says they found out Tuesday afternoon that Cain was cleared for light duty and he says it was clear Adam wanted to come back. “I knew we’d be able to get him at some point back for light duty, but this quick and as good as he’s doing is pretty amazing,” the chief says. “I’ve been on him since very early on ‘come on you need to get back’, just giving him crap, it’s been pretty fun.” He’s here and has such a great attitude.”

Brown says there’s been a lot of community support and support from within the department and the family support has also been huge. Brown says it will be good for the department and Cain to finally be back on the job after the deadly event. “Certainly we’ve all thought that this would be a huge turning point the day he walked back in the door. The very first day he got out of the hospital and came here, that was huge,” Brown says. “Yeah, I think it is going to be good for everybody, and I think it is going to be good for Adam to be back her amongst us.”

The chief said Cain will have to go the process to get to full duty, but is confident he will “Work you way back into being able to physically do the job — and of course Adam’s injuries are a little more than most, so it’s going to take awhile,” Brown says. “But with his attitude and his driver to get back — there’s no stopping him, I don’t think.”

Brown said the department has also stayed close to Hosette’s wife Kelly and some members of the department recently took their young daughter to a father-daughter dance.