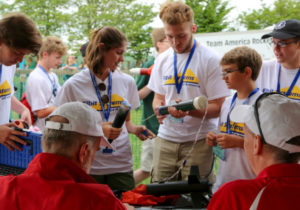 Teams from two Iowa high schools will be competing in the Team America Rocketry Challenge National Finals next week in northern Virginia.

Student Kara Wagner, from Webster City High School, is part of one team of young rocket scientists who will be making the journey. “This challenge is very prestigious because only 101 teams can go every year,” Wagner says. “We hit all of the qualifications for a rocket that we built and we launched it in a qualifying launch a couple of weeks ago.”

The top 20 finishers will earn a spot in next year’s NASA Student Launch campaign and Wagner says her entire team is excited to be picked for the contest. “If we win in Washington D.C., where the actual launching will be taking place, then we will be asked to go to the World Finals in France,” Wagner says. “If we win there, then there’s a lot of awards and it’s a lot of fun to do.”

A team from Maharishi School in Fairfield is also representing Iowa in the contest on May 18th. This is the 17th year for the Rocketry Challenge. Through the years, the contest has inspired more than 70,000 middle and high school students to explore education and careers in science, technology, engineering and math fields.

The contest this year honors the 50th anniversary of the Apollo 11 moon landing this July.