You are here: Home / Fires/Accidents/Disasters / State Education Board takes first step to require seatbelts on all new school buses 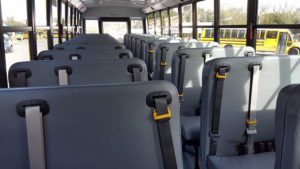 The State Board of Education gave preliminary approval today to a change in state rules that would require seatbelts to be installed in all new school buses.

Department of Education Transportation Director, Max Christensen, told the board members that the National Transportation Safety Board recommended last May that lap-shoulder belts should be required. “Currently school districts are allowed to order buses with lap-shoulder belts if they so desire — but it’s not a current requirement here in Iowa. There are eight states in all new school buses,” Christensen says.

He says they have a group that reviews proposed changes, and they unanimously voted in favor of requiring the belts. Some schools are already requesting them when they get new buses. “We do have I believe 16 districts in the state that are ordering all of their new buses with lap-shoulder belts. And in conversations with them, they are very, very pleased with those lap-shoulder belts,” Christensen says.

Christensen says those districts have found a side benefit to the lap belts along with the safe travel. “For one thing, it reduces the student discipline problem on schools buses by about 80 percent,” according to Christensen. “So that alone is certainly worth looking at.”

Information presented to the board shows the lap-shoulder belts cost around $123 each, and that would add about $8,400 to the cost of an average new school bus. Christensen says that breaks down to about four-and-a-half cents a day for each student on a bus.

There has long been a debate about adding the lap-shoulder belts to school buses — with the thinking that it made it more difficult to get kids out of the bus in an emergency. Christensen says the thought process has changed. “If you look at especially school buses that maybe roll over — probably you’ve all seen the videos on TV that shows the kids inside the school bus — it’s like clothes inside a dryer, around and around they go. Consequently they are going to be injured,” Christensen says. “The current thinking is that it is better to have kids in seatbelts that aren’t injured trying to get them out — than it is to have kids who are injured and trying to get them out.”

Christensen says another factor is kids today  have grown up with seatbelts and are very familiar with their use and how to get out of them.

The Board of Education voted to move ahead with the change and there will now be a public hearing on the proposal June 25th at 10:00 a.m. at the board office in Des Moines. You can also send the board written comments, and those and the comments at the hearing will be considered when the board takes final vote on the issue.