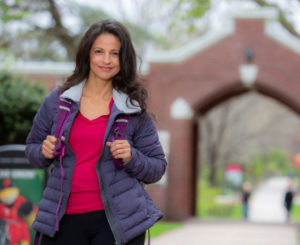 Each one of the record 5,300 students graduating from Iowa State University this weekend has a story, but none quite like Patricia O’Connell.

The native of Brazil is more than two decades older than most ISU students. When she was in college the first time in her home country in the 1990s, the university was shut down by a teachers’ strike. She says being a student as an adult is a big change.

“I really feel the difference between 20 years ago,” O’Connell says. “You go and you have fun, you don’t think that it’s really important sometimes, what you’re reading. Now, I read like I want to know all of these things. I know I need this. I want to use this.” About the same time her education was interrupted, O’Connell met the American she would marry and move with to the United States, eventually settling in West Des Moines.

O’Connell became a stay-at-home mom, a fitness instructor and founded the Brazilian Cultural Center, a nonprofit that promotes Brazilian culture and supports Brazilians living in Iowa. Still, she wanted to finish her studies.”I needed to make a lot of choices to accommodate coming to school because that was very important for me to finish,” O’Connell says. “Right now, I feel like I can’t believe it’s happened.”

At 45, O’Connell is old enough to be the mother of most of her classmates. She has three kids of her own and her oldest son is 19, but she says she always felt welcome and included at Iowa State. “It’s different going to school when you are older,” O’Connell says. “If I talk too much, I’ll cry, but it’s just a very good feeling to finish this.”

O’Connell is receiving her bachelor’s degree in psychology this weekend. She plans to pursue a master’s degree in public health online, with the goal of working as a health eduator.