You are here: Home / News / Highway 2 reopened to limited traffic 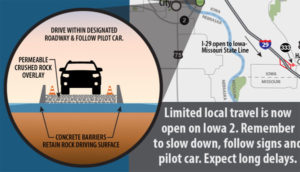 DOT graphic of fix for Highway 2.

The Iowa Department of Transportation has reopened Highway 2 in southwest Iowa for limited traffic.

DOT transportation planner, Scott Suhr told Radio Iowa they used a new system where they set up barrier rails on both sides of the highway to serve as a dam and put down one foot of coarse aggregate, an underlay of fabric and then another foot of road rock that would allow the water to flow through it and let cars travel over the roadway.

This new method was initially thwarted by water that covered the highway in other areas, but that has since gone down and allowed them to open up to traffic west of Inerstate 29. Suhr says they’ve found constantly changing conditions that have made it tough to get the roads open and keep them open.

“We had a situation two weeks ago where we were down at the interchange of Iowa 2 on the southbound exit ramp and it was completely dry — we hadn’t had any rain and the next week we go down there are we are diving through two or three inches of water, and a couple of days later there’s a foot under water. And here last week it went down and we thought there was a possibility we may be able to open this up,” Suhr says.

Traffic will move through Highway 2 using one lane in each direction. In areas where the gravel temporary solution is in place, traffic will be limited to one direction, led by a pilot car, utilizing the westbound lanes. Motorists should expect delays and greatly reduced speeds.