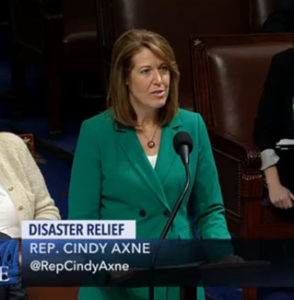 The U.S. House passed a bill today that would provide billion of dollars for rebuilding and recovery for Americans impacted by natural disasters.

Iowa Congresswoman, Cindy Axne, a Democrat from West Des Moines, spoke on the House floor during the debate.
“Entire towns were under water, homes were destroyed, family farms were devastated, and small businesses are facing irreparable damage. Many local schools may be forced to permanently close their doors,” Axne says.

She says Iowans are doing what they can to recover.”I’ve been down to the flood zones multiple times to speak with farmers, homeowners and business owners who have lost everything,” Axne says. “Their resilience is inspiring — but the damage is heartbreaking.”

Axne says though it is important to get the aid to those in need. “Experts believe that it could take years to repair all the damage — Iowans don’t have that time to wait. The National Weather Service shows Iowa will remain vulnerable to flooding all summer, and rivers are expected to stay high,”according to Axne.

Democrats who control the House  pushed this bill forward. There were several attempts to add amendments to the bill during the debate. The legislation includes $3 billions to address recent flooding in the Midwest and other disasters, plus 600 million in nutrition assistance to Puerto Rico. Negotiations continue among Republicans and Democrats in the U.S. Senate on a disaster aid package.

The legislation passed the House today on a vote of 257-150. Iowa Congressman Steve King also voted in favor of it. He released a statement following the vote: “In Iowa, we need this relief and we need it soon,” said King. “I applaud the House for acting quickly, and I encourage the Senate to work just as quickly to produce a final bill that the President will not hesitate to sign into law.”