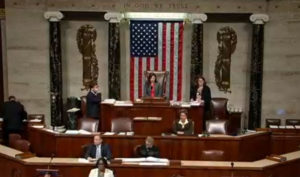 The U.S. House is scheduled to pass a disaster aid bill this morning.

House Speaker Nancy Pelosi has designated Iowa Congresswoman Abby Finkenauer of Dubuque as the presiding officer of the House, to oversee debate of the measure, starting at 8 a.m. Iowa time. Iowa Congresswoman Cindy Axne of West Des Moines got the task of handling some of the amendments on the floor. Finkenauer tweeted Thursday night that the two were “getting it done for our neighbors with much needed disaster relief.”

Last night, President Trump tweeted that House Democrats had come up with a bad bill that House Republicans should vote against. Trump said it would hurt “states, farmers and border security.” Finkenauer replied, on twitter, calling Trump’s tweet “untruthful” and “bull.”

The bill House Democrats plan to pass today would provide more than $17 billion for rebuilding and recovery for Americans impacted by natural disasters in 2017, 2018 and 2019. The legislation includes $3 billion to address recent flooding in the Midwest and other disasters, plus $600 million in nutrition assistance to Puerto Rico. Negotiations continue among Republicans and Democrats in the U.S. Senate on a disaster aid package.