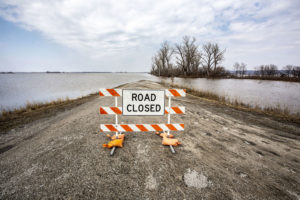 More than 100 homes in southwest Iowa still can’t be reached due to flooding, so FEMA is extending the deadline by which residents have to register for federal aid.

The deadline is being pushed back from May 22nd to July 1st. FEMA spokeswoman Deanna Frazier says she understands the agency is probably not the first thing on the minds of most people after they’ve been displaced. “They’re just trying to get through their lives day-to-day at this point,” Frazier says. “We want to extend that deadline to help them get every dollar that they’re eligible for from the federal government.”

The U.S. Small Business Administration has approved 13 disaster loans for flooded businesses in the region, totaling 1.8 million dollars. State Representative Dave Sieck, of Glenwood, says leaders from Hamburg and other southwest Iowa towns have complained to him about dozens of local businesses being turned down by the SBA for federal aid. “A lot of times, it’s the way they apply,” Sieck says. “Either they don’t apply right or they don’t fill out the paperwork right, because they don’t know. They’ve never had to deal with the government before.”

Businesses that are denied can follow up with FEMA at a local flood disaster center to see what went wrong. They can also get help from the Small Business Development Center at Iowa Western Community College in Council Bluffs.

(Thanks to Katie Peikes and Grant Gerlock, Iowa Public Radio)