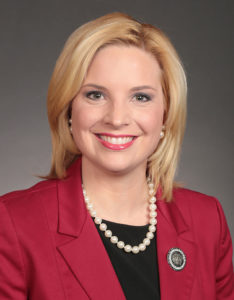 A 35-year-old Republican from Marion who’s been a member of the state legislature since 2017 is launching a campaign for Iowa’s first district congressional seat.

Ashley Hinson was a reporter and the morning anchor for KCRG, a Cedar Rapids television station, before running for the Iowa House in 2016. She was reelected to the Iowa House in 2018 and served as the chair of the Transportation Committee this past legislative session.

Hinson tweeted Saturday she and her husband had just returned from a four-day trip to Washington, D.C. and she has filed paperwork with the Federal Election Commission to launch a race to challenge Iowa Congresswoman Abby Finkenauer of Dubuque. Finkenauer, a Democrat, defeated Republican Congressman Rod Blum last November.