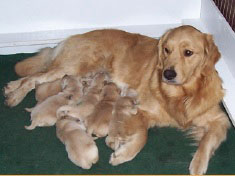 Some 200 people who recently bought dogs from a breeder in south-central Iowa are being urged to have the animals tested for canine brucellosis.

Keely Coppess, spokeswoman for the Iowa Department of Agriculture, says four of the dogs are confirmed infected with the disease — which can be transmitted to people — and a fifth dog is suspected to be sick. “We went on to notify all of the individuals that we know purchased dogs,” Coppess says. “They are quarantined at this point. We have asked that all of those dogs undergo canine brucellosis testing.”

The breeder is identified as Double-G Kennels in Marion County and it’s also now under quarantine.  “The infection is spread through contact with fluids from other infected animals,” Coppess says. “Those highest risk transmissions are going to come from the birthing process, so most dog owners are at very low risk.”

Dogs that catch the disease may show symptoms including reproductive problems (abortions, stillbirth, infertility) as well as behavioral abnormalities, lethargy and weight loss. In people, the disease can cause flu-like symptoms, fevers, joint pain, and can also involve the nervous system, eyes or heart.

“There is not a cure for canine brucellosis, so that’s why we’re testing to wait and see if they test positive,” Coppess says. “Because there is a human health risk, you can either have the option of quarantining those dogs for the rest of their lives, or we would recommend euthanizing.” She says the case serves as a reminder of how it’s always important to practice good biosecurity, like thoroughly washing your hands after handling animals, even household pets.

(Photo from the ISU Veterinary Hospital)