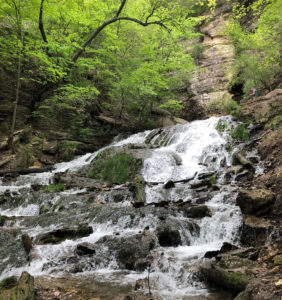 Levels were high enough in some areas that drinking a cup of water could cause gastrointestinal disease. Luther College biologist Jodi Enos-Berlage says the findings can help visitors decide when to kayak or swim. Enos-Berlage says, “I was already at a point to where I’m reluctant to go in the water, or with my family, shortly after rain events, in part because I know what the E. coli levels are.”

At the team’s testing sites, disease-causing E. coli and the parasite cryptosporidium were the most common.  Luther College scientists also found widespread evidence of cow and human feces in surface waters, according to biology professor Eric Baack.

“That was a bit of a surprise,” Baack says. “We know that rural areas often have aging septic systems and they can mean that there’s human fecal matter making its way to the water, in those bacteria. We didn’t expect to see it in over half of our samples, which we did, but at low levels.”

Symptoms of gastrointestinal disease generally go away in a few days, but it can be fatal for children, the elderly, or those with compromised immune systems. Recreation is a growing industry in scenic Winneshiek County, where tourism spending amounts to 30-million dollars a year.