You are here: Home / News / Rule would allow school districts to add time to bus routes 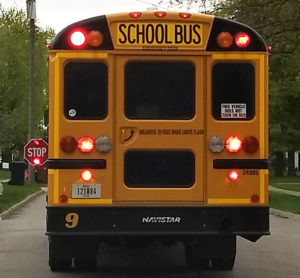 Local school boards could add 15 minutes to the maximum route time for students under a rule change given initial approval by the State Board of Education.

Travel time is now limited to 75 minutes for high school students and 60 for elementary.  Department of Education rules coordinator  Nicole Proesch ,  says they had quite a bit of discussion with several groups about how to handle the travel time.

She says they discussed getting rid of the mandatory ride times altogether, but some of the groups didn’t want that and wanted to make sure the students were not on the bused too long.  Proesch says this allows the school districts some room to make their own decisions based on the input of parents.

“That can be approved by the local board, and beyond that if a district feels like the 15 minutes is not enough, they can still come the to department and apply for a waiver beyond that,” Proesch says. “So they are not hamstrung necessarily by the 15 minutes, but it gives them a little flexibility so they don’t have to come to us and ask for a waiver.”

Education Department Transportation director  Max Christensen, says it has become more of an issue for smaller districts. “We get more requests all of the time simply because you got schools that are consolidating and whole grade sharing….and that just adds to the length of time that kids have to travel,” Christensen says.  Another rule change would require that the two yearly inspections include all vehicles used for student transportation.

“Those vehicles maybe have a rust problem, bad tires, something like that and the vehicle is maybe such they don’t want to repair those vehicles and then they are used for activity vehicles. Which really to us does not make a lot of sense because these vehicles are being driven further and at a faster speed than what route vehicles are,” Christensen says.

They are also asking that the inspection fee be raised from $40 to $50  on July 1st.  The inspection fee has not been raised since 2013. The Board of Education will hold a public hearing on the proposed changes on June 25th.