You are here: Home / Fires/Accidents/Disasters / Flood recovery continues in Hornick 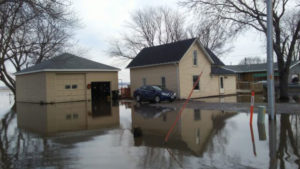 It’s been nearly two months since floodwaters forced the residents of the Woodbury County town of Hornick to evacuate.

Mayor Scott Mitchell says the clean up and rebuilding efforts on homes and businesses are continuing. “Things are moving along pretty good, there’s a lot of recovery yet to go. People are going to rebuild and there’s a lot of stuff the city has to take care of yet on the public assistance side. And people are still trying to work through the individual assistance side with FEMA for funding there,” Mitchell says.

Mitchell says the city is also looking to improve infrastructure to prevent flooding of that magnitude in the future. “I know there’s talk will the Little Sioux Drainage District doing work on the levy system that it overtopped,” Mitchell says. “Around town there’s been talk of things. Right now I’m not sure what would happen — but there is stuff that maybe would come in the future, yes.

Mitchell made his comments Monday after being honored by the Woodbury County Sheriff’s Department as the citizen of the year.