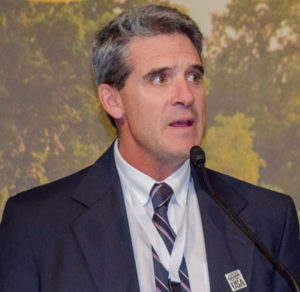 Many Iowa soybean growers are frustrated by the escalation of the trade war between the U.S. and China.

Lindsay Greiner, president of the Iowa Soybean Association, says he was optimistic a deal would be reached but then President Trump announced tariffs on $200 billion  in Chinese goods and China retaliated on $60 billion in U.S. goods. Greiner says farmers continue to suffer.

“It’s kind of like piling on. We’re dealing with delayed planting and flooding and then you add poor prices in and it’s not a good situation right now,” Greiner says, “especially for young farmers, it’s really difficult on them.” Like last year, the White House is promising another round of financial bailouts for farmers who are negatively impacted by the tariffs.

“Agriculture is taking the brunt of the bad business deals for this trade deal,” Greiner says. “We’re looking at soybean prices now that are almost $3 a bushel less than a year ago and well below our break-even. We’re going to need some kind of assistance to keep some of these farms going.” Greiner says it’s more important than ever now that the Trump administration follow through with trade deals with other potential customers.

“We’ve gained some business in other countries through this whole thing but we need to get busy and get some deals made with some of these other countries,” Greiner says. “If we can’t get a deal with China, let’s work on these other deals and I would really urge Congress to get USMCA passed.”

The United States-Mexico-Canada Agreement, which is to replace NAFTA, is being hindered by aluminum and steel tariffs the Trump administration imposed.