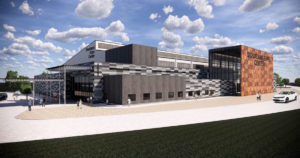 Sioux City council members have okayed spending almost $15 million for a multi-purpose venue that will host everything from farm shows to dog shows to soccer tournaments.

Siouxland Expo Board President Dirk Lohry says the building with 80,000 square feet of exposition space has been in the works about a decade. Lohry says it could bring in visitors from across Iowa and nearby states. “You know if you put on a major farm show, people will come from the five-state region to come here,” Lohry says. “I just want anybody to come here rather than us going to Omaha or Sioux Falls where they have similar facilities like this.”

The $15 million price tag is almost $2 million higher than the original estimate, due in part to higher materials costs. From boat shows to bull riding, Lohry says the expo center will be highly adaptable.  “We can split it into like eight different soccer fields all playing at the same time. We can have a large expo or we can have several smaller expos going on at the same time,” Lohry says. “It’s a very versatile facility.”

The city expects the building to open in the summer of 2020 on land near Interstate 29 and the Floyd River channel. It’s part of a reinvestment district in Sioux City that has four large projects worth a total of more than 130-million dollars in public and private investment.