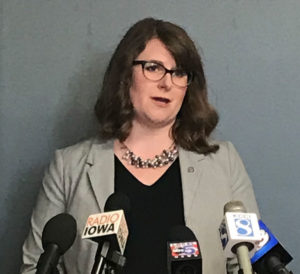 Erin Davison-Rippey, the state executive director for Planned Parenthood, today said her organization used state-approved curriculum for the sex education classes taught in 31 school districts and through a dozen community-based organizations this past year.

“By signing this law, the governor is undermining the health of young people in our state,” Davison-Rippey said, “making it more difficult for them to get the tools they need to make healthy decisions for a lifetime.”

Rita Bettis Austen, legal director for the ACLU of Iowa, said they’re asking a judge to temporarily block the policy from taking effect because the grants for the next year’s sex ed classes will be awarded this month.

“Hopefully, we get some cooperation in teeing this up to be considered by the court quickly,” Bettis Austen said, “so that funding is not interrupted.” 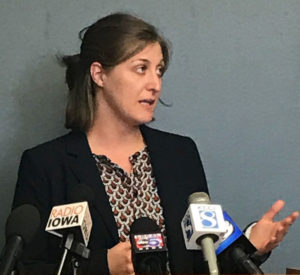 In the past year, more than 3500 Iowa teenagers were enrolled in the courses Planned Parenthood staff taught under one of the two government-funded programs.

“In these at-risk counties, in some cases Planned Parenthood of the Heartland is the only provider of these sex education services, so these teens won’t be able to get the information about their bodies and relationships unless Planned Parenthood is able to provide those services,” Bettis Austen said during a news conference.