You are here: Home / News / Warm weather arrives in time for the Orange City Tulip Festival 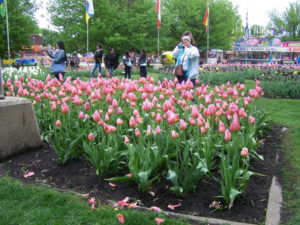 Orange City Chamber of Commerce executive director, Mike Hoffman, cool weather has been a concern, but things are warming up at the right time for the festival. “That sun, you can almost watch them grow. It’s kind of like watching corn in July, you can just see it getting a little bit taller,” Hoffman says. “We are anticipating that a lot of blooms that are still maybe closed are going to be in full bloom and look beautiful.”

Many of the townsfolk can be seen dressed in traditional Dutch costumes as they celebrate and he says the festival is focused on a couple of things.
“It’s a celebration of Dutch Heritage and we call it the tulip — so that kind of rolls us into a celebration of spring too. Way back in the 1930s a couple of folks got together and said ‘hey that was a really hard winter, let’s celebrate that spring has finally arrived’. And as only the Dutch can do — they cleaned up the town, planted some tulips, started a parade, crowned a queen, and away they went,” according to Hoffman. “And that’s kind of appropriate for this year, this is probably going to be some of the nicest weather we’ve had yet this spring.” 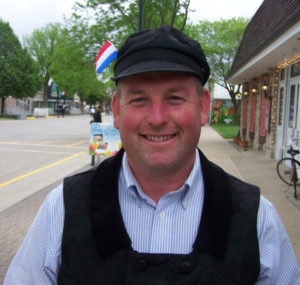 Hoffman says the Netherlands are below sea level, and that led to the use of the wooden shoes as a way to keep their feet dry and it’s part of the tradition in Orange City. He says that tradition also started in the 1930s as a man who emigrated from Holland created a parade float that was a replica of his shoe shop, and it has continued to be a tradition.

Some of the highlights of the Tulip Festival include several food vendors, a carnival, a flower show, a craft show, and art show, the Dutch Dozen singers, windmill tour, and the Night Show Broadway musical. He says they are doing “Beauty and the Beast” again this year, but they have added 30 new cast members and different music. Of course, the Orange City Tulip Festival wouldn’t be complete without the traditional street scrubbing followed by the twice daily parades.

Hoffman says the street scrubbing starts at 1:00 p.m. each day, with the parade to follow, and the evening parade begins at 6:00 p.m. Hoffman says the northwest Iowa Dutch community will not only celebrate the 80th edition of the Tulip Festival next year — but it will also be Orange City’s 150th Sesquicentennial celebration.