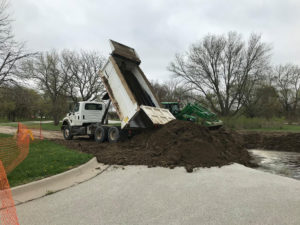 A western Iowa wildlife area reopened this week after being forced to close due to flooding two months ago.

DeSoto National Wildlife Refuge usually sees visitors year-round, but it closed in mid-March as Missouri River levels rose. Park Ranger Peter Rea says a maintenance team from DeSoto and other nearby refuges repaired two sections of paved road that the floodwaters washed out.

“A lot of fill had to be hauled in to fill that and right now, instead of being repaved, they’ve just been covered with gravel,” Rea says. “They’re kind of gravel patches as a temporary Band-Aid before we can get it completely fixed.”

Rea says the flooding has brought some animals to parts of the refuge where they normally wouldn’t venture. “There’s a lot of birds feeding in those flooded areas because it’s shallow water and there’s a lot of fish that are trapped,” Rae says, “so it’s kind of easy picking as far as feeding goes.” 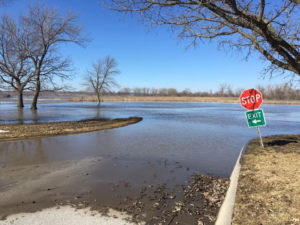 Some areas of DeSoto are still flooded.

They even had a couple of unusual sightings, including a blue heron, which is typically found in the Southeastern U.S. Though the refuge is open to the public, the boat ramps are closed and some hiking trails are still partly flooded.

(Thanks to Katie Peikes, Iowa Public Radio for story and photos.)