You are here: Home / Fires/Accidents/Disasters / Early season quiet with no tornado reports 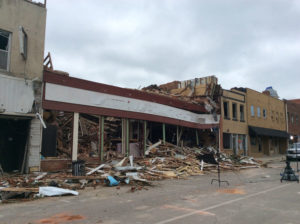 Tornado damage in Marshalltown from 2018.

We’re now at the halfway mark of tornado season in Iowa, and so far, there hasn’t been a single twister reported statewide this year.

While tornadoes can strike during any month, April, May and June are considered the peak months. Meteorologist Chad Hahn, at the National Weather Service, says there is a reason why it’s been such a quiet period for the storms. “Of course, we’ve been experiencing a great deal of precipitation and certainly we’ve seen that with the ongoing river flooding across portions of the state,” Hahn says. “We’ve been cooler than normal over the past few weeks and because of that, we haven’t been able to get the thunderstorm activity going like we’d typically expect in the spring months here.”

After the prolonged cold spell, warmer weather should be moving in over the next few days. Hahn says that could bring a chance of thunderstorms, though likely nothing too rough. “At least at this point, the week looks fairly quiet, but we do see the mercury starting to rise off in the horizon,” Hahn says. “Of course, it’s not a matter of if, it’s when. We can’t let our guard down because we know when that switch flips, we’ll have to be ready to take the appropriate action if we have severe weather.”

Hahn says Iowans should be prepared. “I encourage the public to know that we will get severe weather,” he says. “It’s not a matter of if, it’s when. When that does happen, it’ll likely go from zero to 60, so we need to battle the complacency bug and be ready for severe weather when it does strike.”

Last year, there were 69 tornadoes statewide with the most notable hitting Bondurant, Marshalltown and Pella on July 19th. Over the past decade, Iowa has seen as few as 16 tornadoes during all of 2012 and as many as 88 tornadoes in 2014.