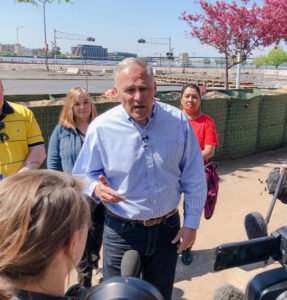 Washington Governor and Democratic presidential candidate Jay Inslee toured flood-damaged businesses in Davenport Wednesday. Inslee, who has made action on climate change the cornerstone of his campaign, said Iowans living through this year’s record flooding are already seeing the impacts of a changing climate.

“I was in Hamburg, Iowa…and saw the heartache of a town that was really ruined by the flooding of that river system, then I come to the other side of the state, Davenport…and this is just maddening to me,” Inslee said. “…We ought to have a government that’s protecting people from these floods.”

Flood levels in Davenport topped 1993 records and Inslee said the data indicates flooding will get worse in the years to come.

“And with all that scientific reality that is threatening these people, we’ve got a guy in the White House who is telling us the climate crisis is a Chinese hoax,” Inslee said. “What a bunch of baloney.”

According to Inslee, you can’t continue to build walls as the water keeps rising. He has today unveiled a $9 trillion “Evergreen Economy” plan that calls for ending reliance on fossil fuels in favor of renewable sources which he calls “clean energy.”

“You can’t have people in leadership positions just talking about the middle ground,” Inslee said. “We need a full-throated mobilization of the United States government to protect these people in Iowa and across this country from the ravages of the climate crisis.”

One of Inslee’s ideas is for a “ReBuild America” program. He says it’s needed to address failing and polluted infrastructure like drinking water systems as well as aging, inefficient systems like the power grid.