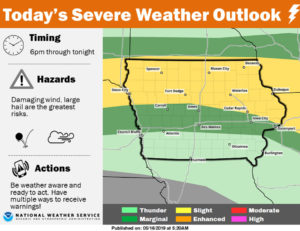 Near-record heat is in today’s forecast, with 80s expected across northern Iowa and low 90s for Iowa’s southern half.

With the hot, humid air comes the greater risk of severe weather. Meteorologist Brooke Hagenhoff, at the National Weather Service in metro Des Moines, says some areas may see summer-like temperatures 20-degrees hotter than usual. “While we’ve been cooler-than-normal for most of May so far, it’s a pretty big change here, especially today, the warmest day in our seven-day forecast,” Hagenhoff says. “It’s really due to the increased southerly flow which is allowing warmer air to come up across the Southern United States and into Iowa.”

With the dramatic change as we shift from cooler to much warmer weather, there’s always the risk of rough weather, including powerful thunderstorms. “For today, we’re looking at a risk over mainly central and northern Iowa and the main threat with that is going to be hail and possibly damaging winds,” Hagenhoff says. “That will be mostly confined to this evening and tonight.”

Many Iowans are rarely very far from their smart phones, which can be set up to provide you with potentially-life-saving weather data. “We know that with the warmer weather, after the cool start to spring, a lot of people are antsy to get outside,” Hagenhoff says. “It’s important that whether you have outdoor plans or not that you have ways while you’re outside to receive severe weather warnings and information, just so you’re prepared.”

The weather should cool a bit Friday and Saturday, she says, with highs by Sunday only creeping into the 60s. On the subject of severe weather, Iowa saw 69 tornadoes touch down last year. So far this year, there hasn’t been a single twister reported statewide.