You are here: Home / News / Bullock says Democrats must reach beyond party’s base in 2020 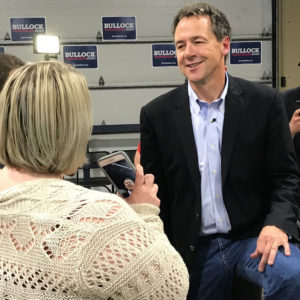 Montana Governor Steve Bullock — a new entrant in the contest for the Democratic Party’s presidential nomination — began his speech to a crowd in Des Moines last night with the core message that’s unifying Democrats.

“For the sake of our country’s standing in the world and for the sake of the nation that we hand off to the next generation, we’re here to make sure that Donald Trump does not get re-elected in 2020,” Bullock said, prompting cheers.

Bullock kicked his campaign off Wednesday and will be making appearances in central and eastern Iowa today and tomorrow.

Bullock used a brief speech to sketch out his political resume for last night’s Iowa crowd. He highlighted passage of a campaign finance disclosure law in Montana along with his successful campaigns as a Democrat in a state Republican Donald Trump won by double-digits. 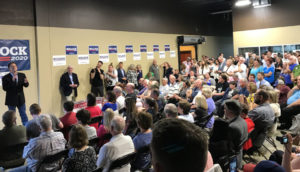 “We can’t just talk to our party’s base all the time,” Bullock said. “Now, I’m not so naive to think that it’ll be easy, but you know what we need to do to get there? We need to address the one thing that’s holding us back on so many issues and that’s the corrupting influence of big money in our elections.”

Bullock took a few questions from the crowd about climate change and corporate influence in politics, then answered questions from reporters about how he intends to distinguish himself from more than 20 competitors.

“All I can do is go out and talk about what I want to, how I can make a difference and ultimately leave it up to the voters,” Bullock said.

Bullock, who is 53 years old, served as Montana’s attorney general for four years and he’s been Montana’s governor since 2013.