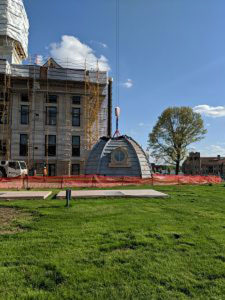 The old dome is off the Marshall County Courthouse.

The tornado recovery continues in Marshallton as the damaged dome atop the Marshall County Courthouse was taken down earlier this week.

Marshall County Building and Grounds Director Lucas Baedke says it involved serval hours of prep work. “They had to trim all around the exterior of the Dome, cut all the fasteners at that point. On the inside, there are six timbers that go from the base of the dome, all the way up to the top. They were bolted into some cross-members, they have detached those.”

Baedke says there was a lot of stress as they planned to get dome off — but things worked out well. “I was happy we had great weather to get it done,” Baedke says.

A replacement dome is expected to be delivered, hopefully this August. In the meantime, workers will see what pieces of the old dome can be salvaged for historical display. The existing dome was constructed in the 70’s and was heavily damaged by the tornado that hit town last July.