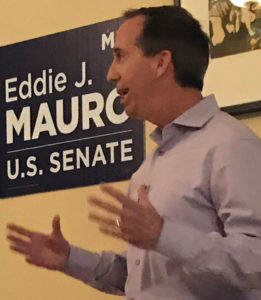 Eddie Mauro kicked off his bid for the Democratic Party’s 2020 U.S. Senate nomination in his mother’s hometown of Carroll on Monday morning.

“That community used to be full of really strong Democrats,” Mauro says. “They’ve left (the party) for a couple of reasons. I’m going to win some of them back.” Mauro ended the day with an event in his hometown of Des Moines.

He saluted Republican Senator Joni Ernst’s service in the Iowa National Guard. “I think public service, though, requires a different kind of courage, a different kind of service, the kind that says sometimes I’ve got to step out of line and say: ‘You know what, I think you’re wrong on this issue.’ I want to go fight for the people of my state first and not for special interests, not for big industries, definitely not the Koch brothers,” Mauro said. “And we’re not getting that kind of leadership out of her today.”

Mauro, who ran for Iowa’s third district congressional seat in 2018, says he learned a few things from that unsuccessful campaign. “I got stuck in a traditional campaign where I was out trying to raise money,” Mauro said. “…My strength is coming out to visit with people and we vow to put teams together in all 99 counties. We visited 30 counties before I made my official announcement.”

Mauro was also the last candidate to enter that 2018 U.S. House race and he’s flipping the script, jumping in to the 2020 U.S. Senate race more than a year before the Democratic Primary. “We want to come up with a new name for the ‘full Grassley,'” Mauro said, “because we’re going to really go out and hit these areas strong and hard and relentless and convince people that they need to figure out where their values really are.”

A spokesman for the National Republican Senatorial Committee issued a written statement, calling Mauro a “looney liberal” and a “third-tier candidate” after former Governor Tom Vilsack and Congresswoman Cindy Axne passed on the race.

Other Democrats pondering a run for the U.S. Senate include 31-year-old Stacy Walker, a member of the Linn County Board of Supervisors. Des Moines attorney Kimberly Graham announced her candidacy last week.