You are here: Home / News / Ernst says Trump made right move in ‘ratcheting up’ tariffs on China 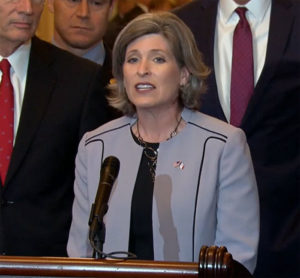 “He called on Mother’s Day…He was upset about China and the fact that they had basically pulled back on items that they had already agreed to,” Ernst said this weekend in Le Mars. “So, while I am upset. I am not a ‘tariff person.’ I don’t appreciate the tariffs, but in this instance I think the president did the right thing by ratcheting up the tariffs on China.”

Ernst said after many months of negotiations, it’s time for a deal that will address China’s theft of intellectual property and other bad trade practices.

“I’m normally not a tariff person and that’s basically how the president started our conversation. He’s like: ‘Joni, I know you don’t like tariffs.’ But he said: ‘I’m a tariff guy and China can’t get away with this anymore,'” Ernst said. “And so we’ve got to keep pushing China to come to the table. We really want to be good trade partners with them, but the question is: ‘Does China want to be a good trade partner with us?'”

On another trade-related issue, Ernst is predicting the “U.S. Mexico Canada Agreement” will easily win passage in the U.S. Senate.

“We are ready and raring to take the bill up and get it on to the president,” Ernst said. “But Speaker Pelosi had laid down a marker. She said those tariffs need to come off and that has been agreed to, so pressure on Speaker Pelosi now to actually move the USMCA through the House.”

On Friday, President Trump lifted tariffs on imports of steel and aluminum from Canada and Mexico. Leaders in the two countries hailed the move as a step toward ratification of the deal that will replace the North American Free Trade Agreement. Ernst made her comments about trade during a weekend stop in Le Mars.

During a Saturday morning town hall meeting in Storm Lake, Ernst was asked about the immigration plan President Trump unveiled last week. She called it a “great step forward.”

“We don’t know the details of the plan and, really, that’ll largely be up to congress to decide what package they want to put together and how to move forward,” Ernst said, “but what it is is a clear indication from the president that he does support moving on immigration and we’ve got to find a path forward.”

Ernst, though, said the plan must address labor shortages in agriculture, as she’s hearing concerns from farmers.

“We don’t need someone that has necessarily a certificate in welding or is a nurse or a doctor, we just need folks who will come in and work on our farms,” she said, “and so we’ve got to figure out how we can get that piece into this package and make sure we’re supporting all different types of industry in our economy.”

Last Thursday, President Trump outlined a “merit-based” immigration plan, with the goal of reducing the flow of immigrants into the country who would take low-wage jobs. It would limit the number of people who could get green cards by seeking asylum or based on family ties to U.S. citizens or legal residents.