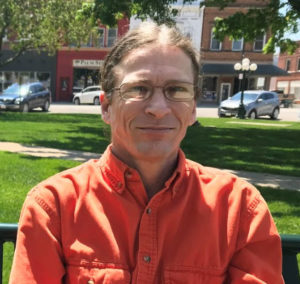 The charge was filed after Jon Goldsmith made an obscenity-laden Facebook post criticizing the way Deputy Cory Dorsey treated a couple of Goldsmith’s friends during the annual “Lazy Days and Battle of the BBQ” festival in Corning last July.

ACLU legal director Rita Bettis-Austen says Goldsmith had the right to make the post. “This is really a classic free speech case and we are very happy to bring it. We hope that we are able to protect our clients first amendment rights in this case,” Bettis-Austen says.

Bettis-Austen was asked if there is fine line between what Goldsmith posted and what is not allowed. “It’s not a fine line between protected speech and harassment,” Bettis-Austen says, “there is strong protection under the First Amendment to criticize police or other government officials, and to do that even in ways that are annoying, offensive, vulgar, use curse words — all of those are protected by the First Amendment.”

She says the things not allowed are very clear. “The exceptions that do exist are for things that are true threats, actual threats of violence,” according to Betis-Austen, “and that’s not something that was present in this case. Or was even sort of in the area of present in this case. This post is clearly core political speech, criticizing law enforcement.”

Bettis-Austen says the Iowa Supreme Court ruled on a case like this back in 1989 before the internet and modern forms of communication were available. “Instead of the posting made on Facebook on social media, the motorist in that case wrote letter to the state trooper who pulled him over and insulted him and criticized his actions. The Iowa Supreme Court held appropriately — in accordance with the First Amendment and free speech under the Iowa Constitution — police officers don’t have a right to put people in jail for annoying them,” Bettis-Austen says.

The charge was eventually dismissed against Goldsmith, but Bettis-Austen says the Adams County Sheriff’s Department has not changed and there are other cases where the sheriff’s department has violated free speech rights cited in their complaint.  “We’re asking that the Adams County Sheriff’s Office do some training on First Amendment rights to its deputies,” Bettis-Austen says.

Bettis-Austen says they are seeking a judgment that the deputy violated Goldsmith’s rights and want the county pay his legal fees. They are also seeking damages from the county as she says Goldsmith experienced anxiety, high blood pressure and was a afraid to go back to Corning in fear of retaliation after the citation was issued against him.