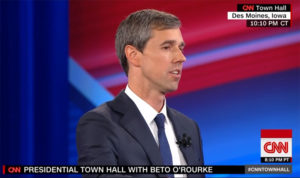 An Iowa farmer asked O’Rourke about the issue during a “town hall” in Des Moines broadcast on  CNN tonight. “You are bearing the brunt of this president’s disastrous trade war and the tariffs that he’s imposed,” O’Rourke said.

“But going this alone, unilaterally, has obviously not produced that,” O’Rourke said.

The trade war is preventing farmers from making a profit, according to O’Rourke.

“We need to have a response to this. We need to ensure that you can pass this farm on to the next generation,” O’Rourke said. “…Let’s bring our allies with us to the table — our traditional trading partners like Mexico, Canada and the European Union — into this fight, to make sure we get the results we’re looking for…I want to win this fight with China, but I want to do it with allies, not alone.”

O’Rourke answered a variety of questions during last night’s broadcast. The second question prompted O’Rourke to reinforce statements he made a few weeks ago, that impeachment proceedings should begin against President Trump.

“If we do nothing because we are afraid of the polls or the politics or the repercussions in the next election, then we will have set a precedent for this country that, in fact, some people because of the position of power and public trust that they hold are above the law,” O’Rourke said, to applause.

O’Rourke said the “sanctity of the ballot box” and the future of the country are at stake. Impeachment proceedings give congress authority to compel the president to provide documents and testify about his actions.