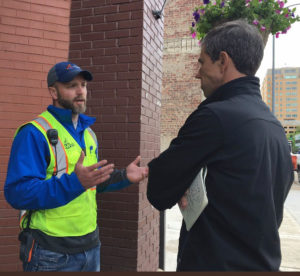 “As we just saw in Davenport and in the other side of the state up against the Missouri, climate change is here. It is real,” O’Rourke said. “It is taking lives. It is taking property.”

Earlier this month, O’Rourke called for reconstructing and fortifying river
levees, part of his plan to deal with the effects of climate change.

O’Rourke also met privately yesterday with union members who work at Arconic, an aluminum rolling mill in Davenport. The Steelworkers are resisting proposed benefit reductions, including a shift to 401k plans rather than a pension system.

“A reminder again that we are all in this together, facing some really tough challenges for this country,” O’Rourke said.