You are here: Home / News / #StopTheBan rallies in Iowa, including group inside Iowa capitol 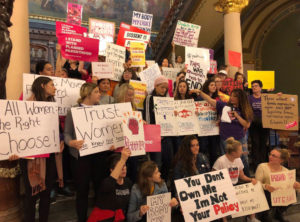 Abortion supporters rallied at the Iowa Capitol Tuesday, part of nationwide protests against new abortion restrictions in other states.

“This is an attack on each and every single one of us,” Erin Davison-Rippey, stae director for Planned Parenthood of the Heartland, said. ” It is an attack on anyone who might or can get pregnant and to anyone who stands alongside us.”

Alabama’s new law makes it a crime to perform an abortion, with a sentence of up to 99 years. Sarena Ramirez of Des Moines said “all women” are threatened by what’s happening.

“In other countries, they have these laws, and women die because they can’t do what is right for their health care,” Ramirez said.

Legislators in states like Alabama hope their new laws spark a challenge of the Supreme Court’s 1973 Roe v. Wade decision that made abortion legal. Some hoped Iowa’s 2018 law could be a test case. It banned abortions as early as six weeks in a pregnancy, after a fetal heartbeat could be detected, but it was struck down by a district court judge in January.