You are here: Home / News / Calls for investigation of Catholic Church, better laws for victims of child sex abuse 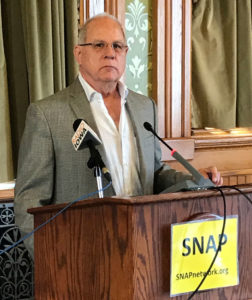 Two men who say they were abused by priests joined the Iowa Senate’s Democratic leader today in calling on Iowa lawmakers to do more for victims of child sex abuse.

Senator Janet Petersen, a Democrat from Des Moines, said the state’s attorney general should investigate the Catholic Church. Petersen also said Iowa’s criminal and civil laws for child sex abuse cases are the most restrictive in the nation.

“Our laws do not protect our communities from sexual predators and I think we cannot continue to ignore this,” Petersen said during a news conference at the Iowa capitol. “There is case after case across this country.”

The time frame for filing criminal charges for child sex abuse is too short, according to Petersen. Child sex abuse victims have until they’re 33 years old to file a civil lawsuit. Sixty-seven-year-old John Chambers of Des Moines said studies show 52 is the average age when a victim reveals they were abused as a child.

“Adults that bottled this up and held it in for so many years,” Chambers said during today’s news conference. “And there are a lot of us.”

Tim Lennon, who grew up in Sioux City, told reporters he was 43 years old when he first remembered being molested by the priest in his childhood church.

“Those memories are the fire, the anger that I feel for what happened to me,” Lennon said. “…What happened to me should not happen to another child.” Lennon, who now lives in Arizona, is a national leader in the Survivors Network of those Abused by Priests (SNAP). He plans to hold a news conference outside the Sioux City Diocese office tomorrow morning.

Lennon said the Catholic Church should release the names of bishops, nuns and others involved in the church who are accused of sex abuse.