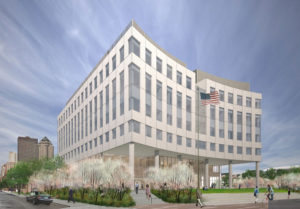 Federal officials have approved the design for a new federal courthouse on a river bank in downtown Des Moines.

Some city leaders have been fighting the plan, saying the courthouse will look like a prison and the spot federal officials picked for construction is a prime location for commercial development. It’s possible a lawsuit will be filed to try to block construction.

The chief judge for the federal court in the southern district of Iowa said in a statement there’s a critical need for a new courthouse in Des Moines with modern security. Critics have suggested the current courthouse should be remodeled instead.

Judge John Jarvey said the building has “some beautiful spaces, but beauty is not enough” and the court looks forward to a new facility “that safely serves the public.”