You are here: Home / News / Highways expected to be busy for this holiday 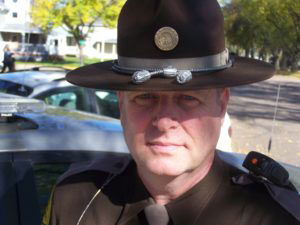 AAA is predicting a record for travel this Memorial Day weekend. Iowa State Patrol trooper John Farley says that means you’ll see a lot of traffic on the state’s roadways.

He says they Patrol wants everyone to be aware of the extra traffic and the need to follow some basic rules to be safe. Farley says during this holiday weekend they are using “SIDE” to explain what you need to do to be safe. “The S of course is for seatbelts — making sure we’re always wearing out seatbelt. It doesn’t matter where we are in the vehicle, every time, every trip, everywhere in the vehicle,” Farley says.

The I stands for impairment and making sure you are not under the influence of alcohol, drugs or anything else will driving. The D is for distractions.
“Making sure that we are putting our devices down. Making sure that we are aware of our surroundings and being in hat good defensive driving mode,” Farley says. “And then of course the E — excessive speed — that goes back to one of the main tenants of the Iowa State Patrol, speed kills.”

Farley says they want to see the number of fatal accidents on the roadways come down this year. “The Iowa State Patrol’s initiative this year is to be below 300. Which is a number that we haven’t been at since the 1920s if you can believe that,” Farley says. Farley says there were four fatal traffic accidents in Iowa last Memorial Day.