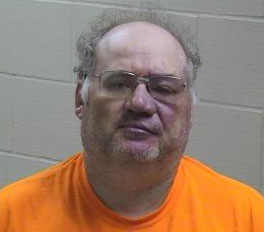 A south-central Iowa man is charged with attempted murder after running into the Decatur County Sheriff’s SUV with a tractor.

DCI Special Agent In Charge, Adam DeCamp says Decatur County Sheriff Ben Boswell and two deputies responded to to a report of a family fight in rural Grand River Thursday. He says they found 54-year-old Gerry Greenland in the driveway on a 4250 John Deere tractor with two front-end spears for hay bales.

“The first deputy encounters this tractor and is able to take evasive action, able to get out of the way of the tractor,”DeCamp says. “the tractor — which does have this hay able spear on the front of it — heads toward the sheriff who is pulled off to the side of the driveway.” He says the Sheriff couldn’t move out of the way.

“Mr. Greenland then takes the tractor and drives it directly into the driver’s side door of the vehicle and pushes it over 100 feet from the initial impact point,” CeCamp says. He says one of the bale spears on the front of the tractor pierces the door of the SUV. “It actually enters into the compartment, pushes away the plastic, and enters into the compartment, one of the tines does,” he says.

DeCamp says the Sheriff was able to escape being hurt, but the action led to the attempted murder charge. “Hay bale spears, they are about three feet long, obviously that could do some significant damage to a human,” DeCamp says.

DeCamp is not sure what caused the family fight that led Greenland to drive at the sheriff. “We are not aware at this time of any drugs or alcohol being involved,” DeCamp says. “This was a dispute on the property where a family member felt they needed to call law enforcement for assistance.”