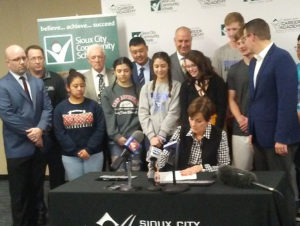 Reynolds signed the measure in ceremonies at the Sioux City public school’s Career Academy. Reynolds says school districts can use it and expand some of the ways they use the funding. The measure also allocates one million dollars to help fund Career Academies such as Sioux City’s, which help high school students learn and train in specific career paths.

“Career academies was something I’m very passionate about… and I just think those are tremendous opportunities for students. So to be able to use the funding for that, I am just very appreciative of that and that was something that I had asked for,”Reynolds says.

Governor Reynolds visited with Career Academy students Jonah Snieder  and Colby East — who are juniors at East High School:
They said they are both in the business path and like how they are getting dual credit for high school and college and how they are able to go out of the building and meet with real businesses and see how they are run.

Sioux City School Superintendent Paul Gausman says the local district was the first in the state to initiate the one cent tax:
Gausman says Sioux City passed it as a local option in 1998, and then in 2008 then Governor Chet Culver came to Irving Elementary School in Sioux City to sign the bill creating the first statewide sales tax for schools.

Gausman says nearly $400 million has been raised locally for new school projects since the tax was first implemented.