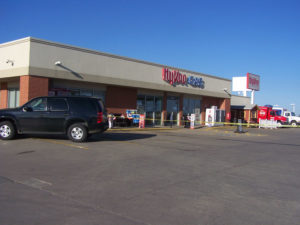 Authorities say two women were seriously injured in an attempted robbery at the Le Mars Hy-Vee gas station early Sunday morning and the male suspect shot himself to death in Nebraska.

“In the process of the robbery, the suspect shot both victims in the stomach area and then fled driving a beige Buick four-door with an Iowa plate,” Vande Vegte said.

The names and the ages of the two Hy-Vee clerks are not being released. Both were taken to a Sioux City hospital and the police chief says the women are in serious but stable condition. Vande Vegte says the male suspect was located at around 8 a.m. Sunday by police in South Sioux City, Nebraska, which is about 35 miles away from Le Mars.

“They did locate the suspect with an apparent, lethal, self-inflicted gunshot wound,” Vande Vegte said.

The police chief told reporters the suspect has ties with Le Mars and it does not appear the public is in any danger.

“Le Mars Police Department continues to investigate this crime and will release details after the investigation is complete. We do ask for the public’s patience, the media’s patience. We have some families that are going through a traumatic event, emergency response individuals that went through a traumatic event and we’re not going to rush into anything,” he said. “We’ll release the information, but it may be a day or so.”

Counselors were sent to meet with Hy-Vee employees. The Hy-Vee convenience store remains closed. A Hy-Vee vice president said like the rest of the Le Mars community, company officials are “shocked and saddened” by the shooting and she said the two employees who were injured were in “our thoughts and prayers.”