You are here: Home / News / Iowan reflects on guarding Tomb of the Unknown Soldier 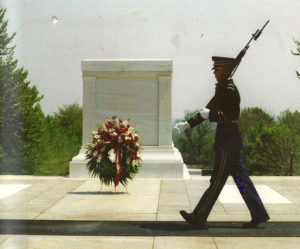 Thomas Tudor at the Tomb of the Unknown Soldier.

An Iowa native who was drafted into the Army during the Vietnam War ended up serving at one of the most hallowed grave sites in the United States.

Thomas Tudor grew up in Des Moines and started his military journey at Fort Ord in California for infantry school. “And at Fort Ord they had an opportunity for anybody who was between the heights of 5-10 and 6-2, didn’t wear glasses and didn’t have a criminal record, and wanted to volunteer for the old guard — which is the ceremonial battalion that does all the ceremonial stuff at Arlington and the District of Columbia,” Tudor says.

He says he volunteered and was the only one chosen out of 40 some soldiers. Tudor was sent to Fort Myer, Virginia and joined the U.S. Army Drill team, where he practiced for hours on his own, and was eventually selected to go to Arlington. “I got orders to go to the Tomb in February of 1969. I was a sentinel for eight-and-half months, and then I became Commander of the Relief, I became the sergeant who changed the guard for the last seven months that I was there,” according to Tudor.

The Honor Guard at the Tomb of the Unknown Soldier at Arlington is know for its precision as the soldiers walk their post as crowds of people often look on. Tudor says he is honored to have served there. “It’s the hardest job I ever loved,” Tudor says, “…it involves training, it involves repetition, it also involves a great deal of self discipline and being able to ignore and shut out certain things.” 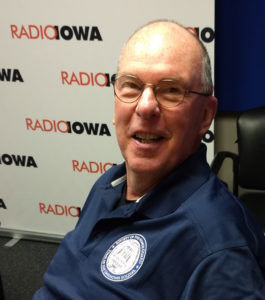 He says there are a couple stories he tells about having to shut out the outside world while walking the post. “The bumblebee bee that landed on the tip of my nose one afternoon. And of the squirrel that climbed up my leg inside my trousers one day. Those are the kinds of things you had to be prepared to deal with,” Tudor says. “It didn’t happen every day, but the discipline was there, had to be there. One of the things a lot of people notice is that Tomb guards don’t move their faces. That was rule number one.”

He says you have to learn how to hold your face to not show any emotion, and the other things come from training. “The precision of the changing of the guard — that was practice. That was done by practicing repeatedly and repeatedly with the guys on your own relief. And then if somebody new came up, you had to train them up so that they were in sync with you,” Tudor explains.

One thing they couldn’t practice for was the weather. “Anybody whose ever guarded the Tomb will tell the heat of summer was the worst, was the worst. There was nothing worse than spending an hour out on the mat on an August afternoon when its 95 degrees and the humidity is 95 percent and you are wearing wool,” Tudor says.

Tudor ended his tour in 1970 — which was the last year that Memorial Day was held on May 30th before it was moved to be held on the last Monday of May. He says he liked things before the change because whatever day the holiday fell on, people stopped to honor the military dead and it wasn’t just a three-day weekend.

Tudor has this advice for you on this Memorial Day. “I would says, I would treat it as it was originally intended, and that’s a day to honor all. All gave some, and some gave all,” Tudor says. “To go out and if you have relatives there that’re deceased veterans — whether they died in combat or not — I would urge anybody to go out and decorate their graves.”

Tudor now lives in Colorado Springs, Colorado. He was back in Iowa to give a talk at the Herbert Hover Presidential Library Sunday. And he is giving a talk at the Goldstart Museum at Camp Dodge Tuesday on the Higgins Boat, which was a key piece of equipment credited with helping win World War Two.

(Arlington photo courtesy of the Society of the Honor Guard)