You are here: Home / News / Post-flood, Davenport’s Skybridge is one focus of major renovation plans 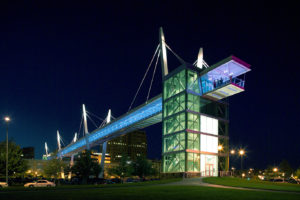 After this spring’s record flooding, Davenport leaders are considering a proposed $53-million revitalization plan for the Mississippi riverfront.

One focal point is the Skybridge, a distinctive glass-and-steel pedestrian bridge that runs 575 feet over River Drive and ends at the levee.

Kyle Carter, who heads the Downtown Davenport Partnership, says the unique structure with color-shifting LED lights is being underutilized.

“The Skybridge is a beautiful piece of art and a lot of our visitors love it dearly, but it does still need something at the end of it that provides another reason to come down,” Carter says. “It needs to be the showcase so when you bring your parents home or you bring your relatives here, it’s the first place you go.”

The Rhythm City Riverboat Casino used to be docked at the end of the Skybridge, but it moved away a few years ago. Carter says two city parks are nearby that already attract residents and tourists to festivals and concerts.

Carter says, “The Skybridge is close to that but if there was a restaurant at the end of it on the first floor and a pavillion deck that was large enough to host a wedding, now you’re talking about a whole different level of engagement with the river and with the riverfront that doesn’t presently exist.”

City leaders, downtown businesses, and the Figge Art Museum are inviting people to offer suggestions about developing the riverfront. The nine-phase proposal includes creating wading and reflecting pools, an “events lawn” with river access and space for a dock, an urban “lounge” or park, playgrounds, public art, more parking and space for food trucks.

“The city could never build this on its own and we know that,” Carter says. “It would require partners from around the region to build something of this scale. We pointed to River Renaissance in the early 2000s as the last time we rallied and got everyone around the table and raised a ton of money to build some fantastic amenities that we still enjoy to this day.”