You are here: Home / Agriculture / Crop report a repeat: too much bad weather delays planting 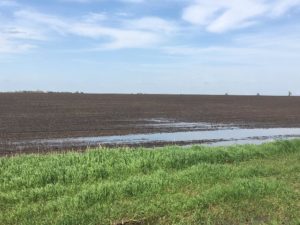 The U.S.D.A. crop report showed just one day suitable for fieldwork last week and corn progress is 10 days behind and soybeans are two weeks behind last year.

Farmers had one sunny day this weekend, but say it was not enough to make a difference. Seventy-year-old Denny Sejkora, told KCRG TV he’s been farming almost all of his life and has never experienced a season as bad as this one because of how wet it has been. Sejkora does still remain optimistic.

“We’ll get it done eventually,” he says. In addition to the wet weather, he’s been dealing with fields near Marion that just won’t dry up. Sejkora only recently got the last of his corn in the ground for this year. “Starts and fits would characterize the way we’ve worked in the field,” he says. “We’d get a bunch done, and then we’d take a break for the rain, let it dry out a little bit.”

But he can’t say the same about his soybeans. The weather has only allowed him to plant about a quarter of his crop so far — about what others across the state have averaged. Normally, about half the state’s soybeans would be in the ground by now. Sejkora say he’s usually well ahead of that by Memorial Day Weekend. He now hopes to have his full soybean crop planted by the Fourth of July, weather permitting. But the rain-related issues don’t stop there for him. Sejkora also makes hay for local farms, but he doesn’t start that until all his crops are planted, and once again, the weather is not working in his favor.

“It’s growing too fast, so it needs to be made because if it’s over-mature, it loses its feed value,” he said. “But you’ve gotta make hay when the sun shines,” Sejkora says. Sejkora says a day or two of dry weather won’t be enough to take care of his fields, but he is confident they’ll dry up eventually.
“There’s hope,” he says, “we’ve just got to find the window and be ready when the opportunity arises.”

The recent flooding in the Quad Cities has brought its own bad luck to the Marion farmer. He says his April beans haven’t moved yet because the river was too high at the terminal in Davenport. He also hauls grain for other farmers and says the wet weather has made it tough getting around on county roads.