You are here: Home / News / Hands-free law for drivers ‘seems like the next natural step’ 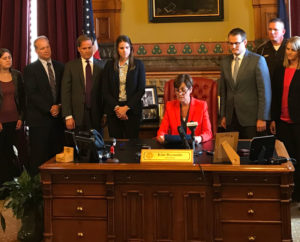 Governor Kim Reynolds has declared this “End Distracted Driving” week and a spokesman for the Iowa State Patrol says a smart phone is the main distraction troopers see on Iowa roads.

“People know it’s wrong, but they’re still doing it,” said Sergeant Nathan Ludwig, who says he sees too many drivers texting while he’s on patrol and when he’s out on the road in his personal vehicle.

The state patrol has written about 100 fewer citations so far this year for texting while driving.

“We hope that people are getting the message, but the bad news is that…the majority of the accidents are attributed to distracted driving,” Ludwig told reporters this afternoon. “So just because we’re not stopping the cars and writing the citations for doing it doesn’t mean people have stopped doing it, because crashes are going up.”

There 17 categories of “distracted driving” on the DOT’s accident form and Ludwig said drivers using a phone is the “number one” distraction. Troopers have issued 331 tickets for distracted driving since January 1. 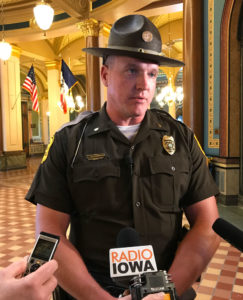 According to Ludwig, the biggest misconception among motorists is a driver can read their email and text while they’re at a stoplight.

“You have to be off the travel portion of the road and be at a complete stop before you can engage in any internet or texting activity,” Ludwig said.

The fine for texting or surfing the internet while driving is $100. Iowa lawmakers considered a “hands free” law for drivers this past year. Sergeant Ludwig said that would be easier to enforce.

“But that’s up to the legislature and I think it may come down the road, but you don’t need a law to tell you common sense,” Ludwig says. “We just want people to get the phone out of their hand.”

Eighteen states have laws which bar drivers from handling a smart phone while they’re driving. Governor Reynolds told reporters that “seems like the next natural step” for the state to take, especially when considering the statistics about traffic accidents.