You are here: Home / Crime / Courts / Le Mars police give update on the shooting of HyVee employees 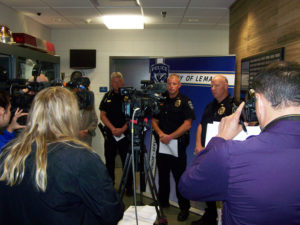 Le Mars police give an update on the shootings.

Le Mars Police have identified the two employees and the man who shot them in an attempted robbery early Sunday morning at the HyVee convenience store.

Assistant Police Chief Justin Daale spoke today at a news conference. “The suspect has been identified as 26-year-old Oscar Gutierrez. He displayed a nine millimeter handgun and demanded money from the two clerks,” Daale says. “After he demanded the money he had shot one of the clerks, which was Faith Laskie age 18. She was shot in the abdomen area. Gutierrez then shot clerk Ashley Storesund — age 29 — also in the abdomen area. He attained no money before or after the shooting.”

Daale says they had a license plate number of the car and were able to get a cellphone signal for Gutierrez. The car was found by South Sioux City, Nebraska  police not long after the shootings. “They had located our suspect Oscar Gutierrez inside his vehicle with a lethal self-inflicted gunshot wound,” Daale says. “He was located after a broadcast was put out shortly after the incident here in Le Mars on locating the suspect as well as the suspect vehicle.”

The two women are listed in stable condition. Daale says a nurse and another HyVee employee who was an EMT gave them immediate aid after the shooting and that was key. “I think with the immediate response that they took…I think that eased the tension I guess in the store. They did exactly what they were supposed to do. I think it helped the victims probably more than anything. They did a fantastic job of taking immediate action,” according to Daale.

Daale says Gutierrez was known by the department for mostly minor run-ins. Police say the results of a toxicology report on
the Gutierrez’s body won’t be known for a while. Counseling services are still being made available to the Le Mars HyVee employees.