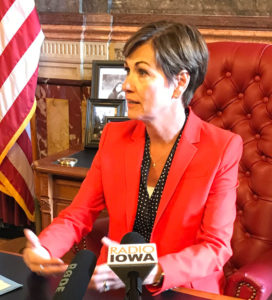 Governor Kim Reynolds says she’s willing to work with lawmakers to adjust Iowa’s medical marijuana law, but Reynolds says she made it clear to legislators she had concerns about a bill that could have boosted the potency of the cannabis products sold at state-licensed outlets.

“I do not support recreational marijuana and I just felt that was too much of a jump,” Reynolds told reporters this afternoon.

“It wasn’t a surprise,” Reynolds said.

Reynolds told reporters today that she could have accepted all the other aspects of the bill, but allowing an Iowan to buy cannabis products with up to 25 grams of the chemical THC over a 90 day period was the stumbling block.

“For example, if you take a gummie that you can get in Colorado that has THC in it, that typically has anywhere from five to 20 miligrams and the bill that passed was 25 grams, which would equate to 277 grams per day,” Reynolds said.

Supporters of the bill say the limited number of Iowans who’ve gotten a doctor’s recommendation to use cannabis pills, oils and creams need higher dosages to deal with pain and other medical issues. Two Democrats in the Iowa Senate plan to hold a news conference tomorrow asking their fellow legislators to reconvene in a special session to override the governor’s veto.

The bill passed the House and Senate by overwhelming margins, but some House Republicans who voted for it expressed concerns after learning a state advisory board did not support the potency recommendation in the legislation.

“I have to balance the health and safety of all Iowans with a program that’s providing some alternatives to individuals that feel that it is making a difference,” Reynolds said.

The top two Republican leaders in the Iowa Senate say expanding Iowa’s medical marijuana law will be a priority for them in the 2020 legislative session. Reynolds said she’ll work with lawmakers to ensure any expansion is “narrow and cautious.”