You are here: Home / News / Storms that produced Monday’s tornadoes ‘a rarity’ 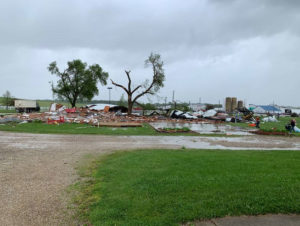 At least five tornadoes touched down in Iowa yesterday.

“Kind of the strange part about this type of weather was it wasn’t even really associated with true thunderstorms, so a little bit of a rarity,” said meteorologist Todd Shea.

Shea works in the National Weather Service office in La Cross, Wisconsin, which tracked some of Monday’s storms.

“Most of the tornadoes that did occur from Charles City up towards Lime Springs and into southern Minnesota literally occurred with storms that weren’t even considered thunderstorms. There wasn’t even thunder or anything. It was just rain showers, but it was an environment that could support that type of tornado activity.”

“Most of the damage was to farm buildings. There were a couple of homes near Charles City that were hit pretty hard,” Shea said. “But a lot of the tornado activity also just occurred in open country which was kind of a blessing, that it didn’t hit more structures.”

One tornado early Monday afternoon caused heavy damage to the Floyd County Fairgrounds in Charles City, as well as to a fertilizer plant. There was also tornado damage in or near Lime Springs, Elma, Cantril and in southeast Iowa’s Des Moines County. Howard County Emergency Management Coordinator Darrell Knecht said the roofs were damaged in several homes near Riceville and Saratoga and a hog confinement was destroyed.

A sixth twister is still unconfirmed near the Quad Cities. No serious injuries are reported.