You are here: Home / News / Gravel roads continue to be soupy in many parts of the state 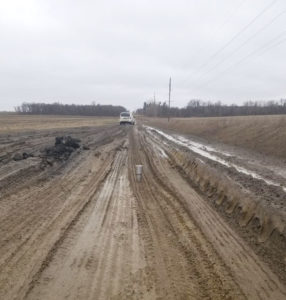 This is one of Iowa’s wettest springs on record and many of the state’s rural roads are becoming impassible even if they weren’t touched by floodwaters.

Hamilton County Engineer Nikki Stinn says continued rainshowers have turned countless gravel roads into soupy, muddy messes and residents are expressing frustration with poor driving conditions.  “The roads are all still just completely saturated,” Stinn says. “Whenever it dries out enough for us to get our equipment out there, we are out there blading and hauling rock, but it seems like every other day or every third day it rains. When it gets wet again, we wait a day for it to dry out and we go right back to fixing what we can.”

Conditions began to degrade a few months ago with the runoff from snowmelt and Stinn says she’s hoping weather conditions will improve soon.
“We’re still trying our best, it’s just that the roads are completely saturated,” Stinn says. “Dirt, when it’s wet, dirt and rock, don’t adhere together and they can’t hold up weight.”

Gravel roads that are missing sections of gravel can present serious hazards to motorists, and Stinn says channeling the poet Robert Frost may be one possible solution. “If you hit a soft spot, it will throw you and it will suck you to the side,” Stinn says. “Pay attention and try to be as safe as possible. A lot of the roads that get the most traffic are the ones in the worst condition, so if you can take roads that are less traveled, they may be in better condition.”

The Hamilton County Secondary Road Department spends more than one-million dollars a year for gravel and limestone on the unpaved roads.