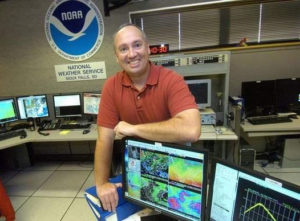 Flood watches and warnings are now posted for many rivers in northwest Iowa.

Mike Gillispie, meteorologist and hydrologist with the National Weather Service in Sioux Falls, says the Rock River between Rock Rapids and Rock Valley has already exceeded its banks. “Rock Rapids already crested overnight or yesterday evening and has started to fall,” Gillispie says. “Rock Valley is going to be cresting late this morning or early this afternoon, just a little higher than it is right now, both of those in the moderate levels.” Gillispie says the Floyd River is expected to rise, but shouldn’t cause any serious localized flooding.

“We might see a little bit drier weather coming in the next week to two weeks, probably closer to the middle part of June,” Gillispie says. “We might be seeing things turning the corner a little bit. The precipitation outlooks are below normal.” Temperature predictions do not call for extremely hot weather, just mostly highs in the 70s and some 80s, much closer to the seasonal average.