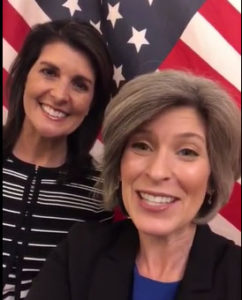 A woman who many consider to be a presidential candidate of the future will be the keynote speaker at Senator Joni Ernst’s fundraiser next month.

Former South Carolina Governor Nikki Haley was the U.S. Ambassador to the United Nations for the past two years. Ernst and Haley recorded a brief video about the 5th annual Roast and Ride fundraiser for Ernst’s 2020 campaign.

“I’m so excited to be supporting Joni and can’t wait to see all the Harley riders and go see everybody in Iowa,” Haley said. “We’re going to have a blast.”

Haley left her role as U.N. Ambassador at the end of 2018. She has a book coming out in November. It’s titled “With All Due Respect: Defending America with Grit and Grace.”

Haley, the daughter of immigrants from India, is the first woman and first minority to be elected South Carolina’s governor. She endorsed Marco Rubio before the 2016 South Carolina Primary. After Rubio exited the race, Haley backed Ted Cruz.

Haley tamped down speculation she might challenge Trump in 2020 and has endorsed Trump’s bid for a second term.