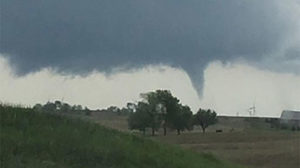 One person was injured by a tornado in Powesheik County.

One person was injured when a tornado moved through Poweshiek County in southeast Iowa last night.

“Two properties were damaged in rural Montezuma, both of them were just outbuildings, shop-type buildings. No homes were significantly damaged,” Paul says. “One injury was reported from this tornado but those injuries were minor and not life-threatening at all.”

Paul says the National Weather Service will be in the county this afternoon to determine the strength of the tornado.