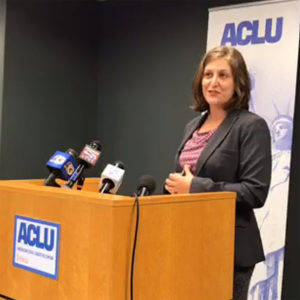 The ACLU of Iowa has filed a lawsuit to block implementation of a new Iowa law that bans Medicaid from paying for transgender surgery.

ACLU attorney Rita Bettis-Austen made the announcement today. “We have filed for a temporary injunction in addition to seeking a permanent injunction well as declaratory relief — finding that this law violates the Iowa Constitution,”Bettis-Austen says.

The law was passed after the Iowa Supreme Court upheld a district court ruling that the ban violates the Iowa Civil Rights Act. Bettis-Austen says they are asking the Supreme Court to take the ruling one step further in this new case. “The district court’s determination that this is discriminatory as a violation of the Iowa Constitution and that heightened scrutiny applies, governs this law exactly,” Bettis-Austen says. “But the Iowa Supreme Court hasn’t reached that constitutional question yet. In this case they will be asked to reach that question.”

Bettis-Austen says they are also raising the issue that this is a case of “log rolling” where it she says it was quickly pushed through in the Health and Human Services funding bill. “Nothing in this HHS appropriations bill provided any notice to lawmakers or the public that a substantive amendment to Iowa’s longstanding Iowa Civil Rights Act would be tucked into this appropriations bill,” Bettis-Austen says. “We also make a challenge under Iowa’s inalienable rights clause. And we focus on the urgent medial needs of our clients and other transgender people on Medicaid to this care.”

This case involves two people who were set to have transgender surgery in September.