You are here: Home / News / EPA approves E-15 blend gasoline for year-round use 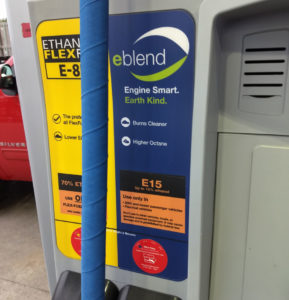 Backers of ethanol in Iowa are praising the announcement today  that the E-15 blend of gasoline will be allowed to be sold year round.

U.S. Environmental Protection Agency (EPA) Administrator Andrew Wheeler told Radio Iowa the decisions fulfills a promise made by President Donald Trump. “This will hopefully help the corn industry in Iowa and it will give more choices to consumers so that they can purchase E-15 12 months out of the year,” Wheeler says.

The blend mixes 15 percent ethanol with gasoline and prior to the change retailers had to stop selling it on June 1st. Wheeler says they can now continue selling the fuel all year. “I know some people will say well that’s only three months — a quarter of the year, but that’s when most people are driving. That’s the highest volume of drivers in the country,” Wheeler explains. “By doing this in time for the summer driving season, we expect that the use of ethanol will increase.”

Iowa is the top ethanol producing state, with more than 4 billion gallons produce, and backers have pushed for the change for years. Wheeler says the EPA had to follow its process. “We had to make sure that it would not negatively impact air quality. So, we had to go back and look at the research, look at the data and to make sure that the air quality would not be negatively impacted. We had to make sure that we had the legal authority to do this and what we did is we put forward in our final regulation today the arguments and the legal authority that we had, and explain that to the public,” according to Wheeler.

He says they determined E-15 is a viable summer fuel. “We’re expanding the volatility waiver that Congress gave us for certain blends of gasoline and E-10 in the past. And what we’re doing through an interpretative rule that E-15 is similar to E-10 in both the environment and automobile rules,” Wheeler says.

Those who back ethanol are concerned about exemptions granted to some refiners on the amount of ethanol they must blend with fuel, saying the exemptions are too easily handed out. Wheeler says they follow the guidelines in those determinations. He says refiners can apply for an exemption if they can prove that they have an economic hardship. Wheeler says they are looking at some request for waivers on a case-by-case basis and determining if those small refiners would be economically harmed if they are forced to produce ethanol.