You are here: Home / News / Flooded I-29 exit in Sioux City may reopen 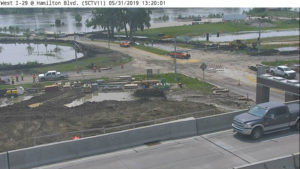 City and state road crews are working to re-open an Interstate 29 exit into downtown Sioux City that’s been closed by Missouri River flooding.

“They plugged a couple more drains,” Mark Aesoph, the fire marshal in Sioux City, said today. “They’re starting to remove some of the water.”

The area is still closed to traffic, but there’s been significant progress over the past few hours. The National Weather Service has slightly lowered its predicted crest for the Missouri River this weekend in Sioux City, “which is a good thing,” Aesoph says.

The reduced crest prediction comes despite the increased release of water into the river from the Gavins Point Dam in Yankton.