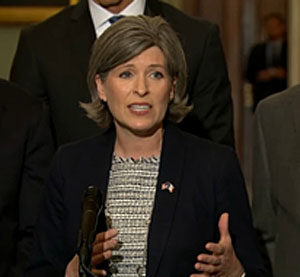 Iowa’s two U.S. Senators, both Republicans, are urging President Trump to reconsider his threat of new tariffs on Mexico.

Senators Chuck Grassley and Joni Ernst say they both agree something must be done to stop the stream of asylum-seekers flowing through Mexico and arriving at the southern U.S. border, but both say a new tariff would impose a financial burden on American consumers, farmers and harm the U.S. job market.

Grassley said “trade policy and border security are separate issues” and Grassley said it would be “a misuse of presidential tariff authority and counter to congressional intent” if the president follows through on this threat. Both senators say the move would “seriously jeopardize passage” of the U.S. Mexico Canada Agreement as well.

“Trade policy and border security are separate issues. This is a misuse of presidential tariff authority and counter to congressional intent. Following through on this threat would seriously jeopardize passage of USMCA, a central campaign pledge of President Trump’s and what could be a big victory for the country. President Trump should consider alternatives, such as imposing a fee on the billions of dollars of remittances that annually leave the United States to Mexico, which only encourage illegal immigration and don’t help the U.S. economy. It could fund border security measures and would put economic pressure on Mexico without imposing a financial burden on U.S. consumers or harming American jobs. I’ve long supported reforms to remittance law, which haven’t become law because of opposition from big banks and other financial interests. Mexico must help get the border crisis under control and the president should use appropriate authorities to apply pressure. I’ve also called for a Safe Third Country Agreement so that Mexico cannot simply pass the buck to the United States. Mexico has a leading role to play here when asylum seekers are traversing their country without regard to the law and without consequence. Congress must also immediately fully fund border security and interior enforcement. Democrats should come to the table in a reasonable way and work to put an end to the security and humanitarian crisis on the border. I support nearly every one of President Trump’s immigration policies, but this is not one of them. I urge the president to consider other options.”

“It’s clear that we need to address the unprecedented flow of illegal immigrants coming across our border day in and day out; and it’s imperative that Mexico step up and do its part to stop the stream of these migrants. That being said, the livelihoods of Iowa farmers and producers are at stake. The USMCA would provide much-needed certainty to our agriculture community, at a time when they need it. If the president goes through with this, I’m afraid progress to get this trade agreement across the finish line will be stifled. While I support the need for comprehensive border security and a permanent fix to illegal immigration, this isn’t the right path forward. I’m asking the president to reconsider, and for Democrats to work with us to find a solution to the humanitarian crisis at our southern border.”